It's only words and words are all I have to take your heart away!

Behavioral finance is a widely talked about subject across geographies these days. The premise of an investor being loss averse rather than risk averse and taking emotionally optimal decisions rather financially optimal ones have been more than vindicated over countless bull and bear cycles. More so, the redundancy of the Rational economic man and the emergence of bounded rationality only add fuel to the importance of understanding different cognitive and emotional biases that reside within investors.

Stock prices are nothing but the common ground of the buyer's and seller's bias. What might be cheap for the buyer is definitely expensive for the seller and when the two sets of bias net each other out, we arrive at the quoted price of the security at a given point in time.

News and developments about a company's operations occupy a substantial portion of any investor's thesis for his investment as he develops a heuristic. The initial conviction of his idea then comes from this heuristic and keeps on growing with time as more news comes into public domain. This process, when repeated over a sustained period of time takes the investor into a parallel universe - which is entirely the creation of his initial anchor developed after reading the first bit of news. 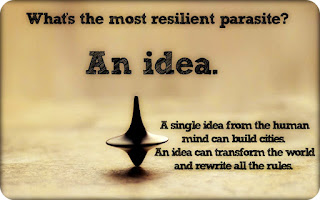 It's common knowledge that an investor cannot earn more than the company - in simple words, your investment grows in sync with the earnings of company you're invested in.( Of-course, there are deviations in the short term.)

Now, let's have a look at a sequence of  images below - I'm not revealing the name of the company yet. 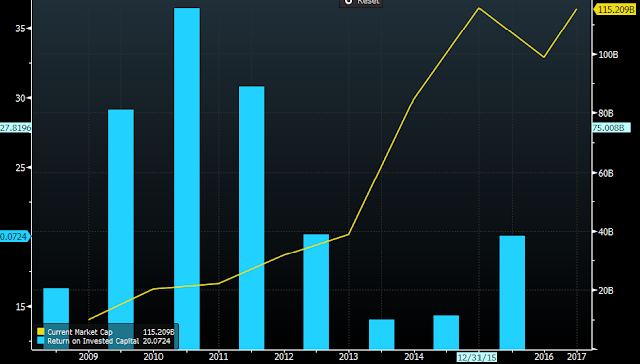 The first panel pits growth in Market cap against growth in Net Income. The second panel is a graphical depiction of P/E Multiple v/s Market cap and the third panel pits RoIC against the same. Notice the common trend in all of the three - it's the market cap that wins the race against everything else - an investor's dream! (Isn't it?)

"Enough of financials, they never portray the complete picture!" 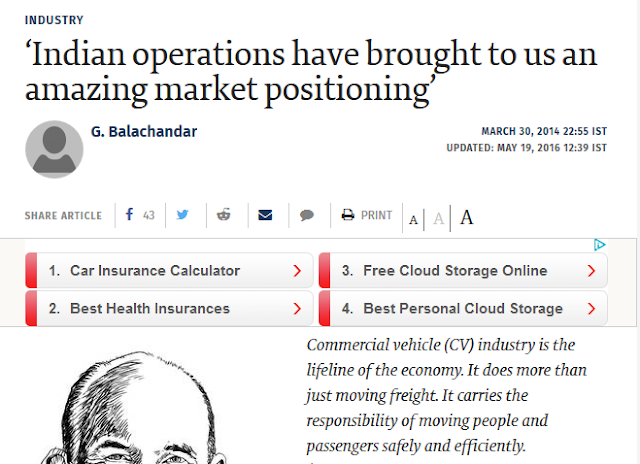 The initial heuristic here is the first bit of news that mandated implementation of the Anti Braking System for all Commercial Vehicles in India. Careful selection of phrases - "Cusp of an up-turn" , "margin lucrative" and "significant upside for revenues and earnings" provide further impetus to the psychological profile of the investor. Besides, the company would now start reaping the benefits of softer commodity prices.

So here we are, faced with this immensely lucrative opportunity of investing in a company that has 85% of the Braking system market , catering to an industry that is 'on the cusp of a visible turnaround.'

But do subsequent numbers support our view? 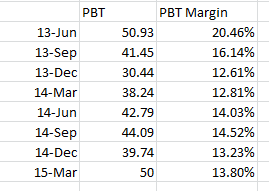 But you know what? Our initial assessment can't be wrong. The CV Cycle will turnaround and there are much better days ahead in store!


So here we stand at a juncture where earnings haven't caught up and the market cap of Mr Company is seemingly touching new heights daily.

Something needs to give in? Please? Or maybe not?


Yes, Mr Company did see light at the end of the tunnel as pent-up replacement demand for the new ABS fitted series of Commercial vehicles did propel earnings growth for most of FY'16 albeit with very little margin improvement

That brings us to FY'17 and with Q4 earnings on their way, Mr Company has clocked in 226cr of Profits before taxes which compares to 271cr earnt in FY'16. What's interesting to note is that the company has clocked in ~1600cr odd of revenues which hence translates to margins of nearly 14.5% . Assuming the company ends FY'17 with revenues of 2100cr and profits of 290-300cr , it would represent a profit CAGR of 6.7% in profits and 14.4% of revenues for the past 5 years!

Hey, but revenues have doubled! It's just a matter of time before profits catch up! Have you read the latest news on Mr Company?

What we've just witnessed is a very common behavioral trap that many investors(including us) fall into - the anchoring trap. In this case, the anchor was formed when Mr Company's revenues were earmarked for fierce growth, earnings were expected to sky-rocket and margins were touted to explode , given the mandate of ABS Implementation, softening of the commodity cycle and higher share of 'value added products.'  Talk of India becoming the epi-center of global growth added a little spice to the dish as well. However, the anchor that was formed in 2014 wasn't re-visited even though Mr Company continued to throw up underwhelming numbers.

Access to articles that  under-lined only the positives of the company coupled with the trap of searching for positive news has over time led to a burgeoning bias within investors that come what may, Mr Company cannnot falter!

Let me now introduce to you, Mr Company - WABCO India 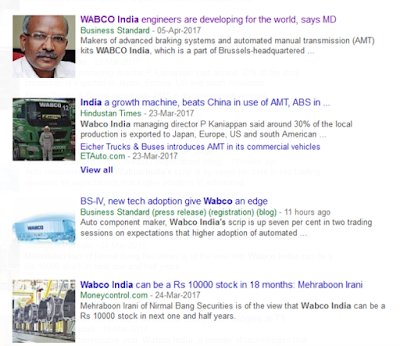 
Working within the realms of bounded rationality and keeping traps and psychology aside, a simple analysis of the P/L Statement of Mr Company throws up simple conclusions for the visible under-performance

(Note - every line item is expressed as a % of revenue)


A large portion of investor returns from owning the Wabco stock has been from speculative growth of the company's market cap , with earnings providing very little support. Sanity prevailed in FY'16 , but was it too little?

As discussed, over a sustained period of time, the growth in market cap always complements growth in earnings of the company. Here, in the case of Wabco we see a dicotomy developing between two complimentary factors due to certain biases that have resided in investors which hence lead them towards taking emotionally optimal decisions rather than financially optimal ones.

What we've tried to highlight is exactly this phenomenon and this shouldn't be taken as a buy or a sell recommendation in any way. I have no vested interest in the afformentioned company.