Sometimes there exists a situation which becomes difficult for the human mind to comprehend. The sugar sector in India is one such where it is difficult to understand why such a dire situation exists for a sector which forms a backbone for the agrarian economy in the country.
This has been proven time and again that for anything to flourish the entire ecosystem has to benefit. We cannot expect to compensate one part of the value chain by squeezing the neck of the other. However this is what existed in the sugar sector as early as 2015. Have a look at what the biggest sugar miller in India had to say in 2015…. 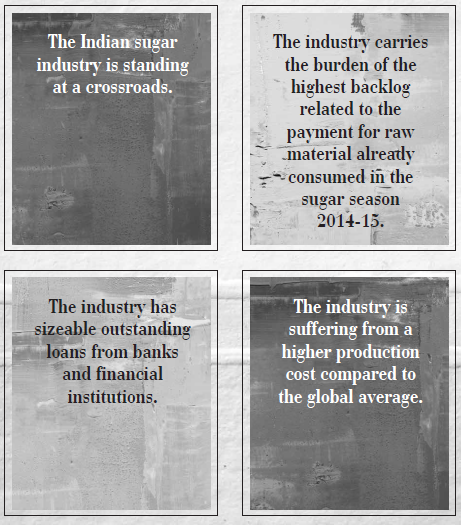 This is an extract from the annual report of Balrampur Chini in 2015. We cannot expect to hold one part of the value chain at ransom to over compensate the requirements of another. This is simply not sustainable, especially in a sector which is so important to the ecosystem of the country. Let’s have a look at some simple facts of the sugar economy in India
Facts about the Indian Sugar Industry


However in 2017 the company had a different tone 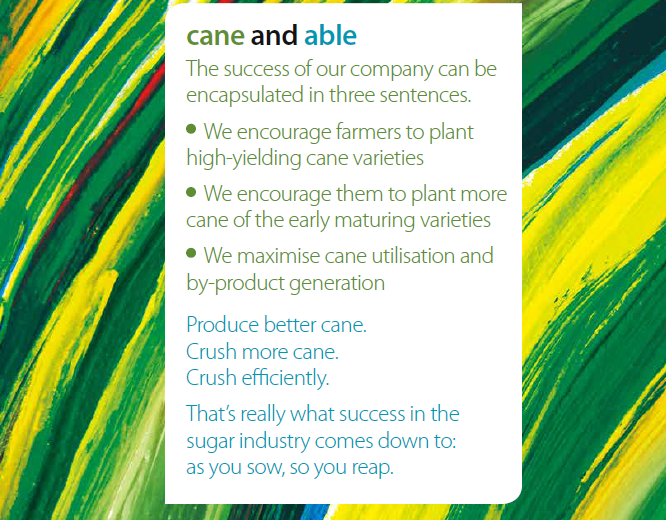 The profits have shot up

This is an exercise in finding out what changed and foremost what ails this sector so deeply that it forms a part of the untouchables for many. To understand that we tried to dig deep into the workings of the sugar sector and this is Part 1 of our exercise which will be followed by much deeper understandings of how this industry works and is anything changing?
Let’s first understand how sugar is made…
The process of making sugar starts at the farmland with the sowing of the sugarcane crop. Sugarcane is a water-intensive crop (1 kg of sugar production in Maharashtra requires around 2300 liters of water) and any shortage of the same significantly inhibits growth.
In India, there are three variants of the same namely –


The adsali and the spring Crop take 18 months to mature while the autumn crop takes 12 months to mature before they can be cut and sent to sugar mills for further processing.
The cultivation of sugarcane happens through the age old ‘ratooning’ method in which subterranean buds on stubble  (the part of cane left underground after harvesting plant cane), gives rise to succeeding crop stand which is usually referred to as ‘ratoon’ or the ‘stubble crop’
Now that we know how sugarcane is cultivated & harvested let’s understand what happens next…
Once the cane is harvested, it is then taken to the sugar factory for conversion. The sugar mill needs to be in very close proximity to the sugarcane farms.
Let’s understand why….. 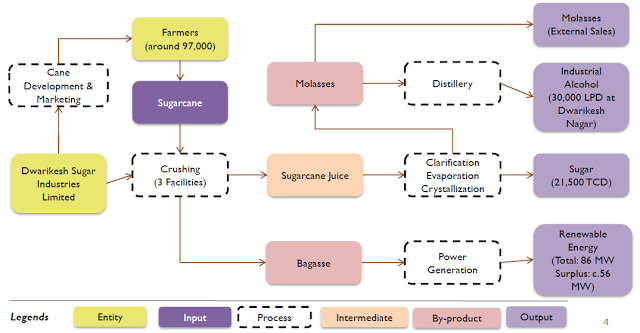 (Source: Dwarikesh Sugar)
Let’s understand how an integrated facility helps…
All of this helps in managing realizations as sugar production is weighed down by high fixed costs, volatile realizations & vagaries of government policies. Let us try an understand each of these point in details
High Fixed Costs
For any commoditized business, having low cost production and optimizing usage of by-products are imperative for sustaining profitability. In this case, optimizing output from each ton of cane procured is an absolute necessity for an integrated mill to ensure maximum production of both sugar and its associated by-products.
This variable is measured by tracking the recovery rate. The recovery rate is the quantity of sugar that is retrieved from processing one tone of sugarcane. Let us explain how this works. For eg: If the recovery rate is 11.5% that means for every tone of cane processed you get 115 kilograms of sugarcane.
The recovery rate is not standard across regions. It depends on soil, climatic conditions, variety of crop used, etc.
Let us now show you how the recovery rate affects all the byproducts of sugarcane conversion assuming 1 tonne of sugarcane 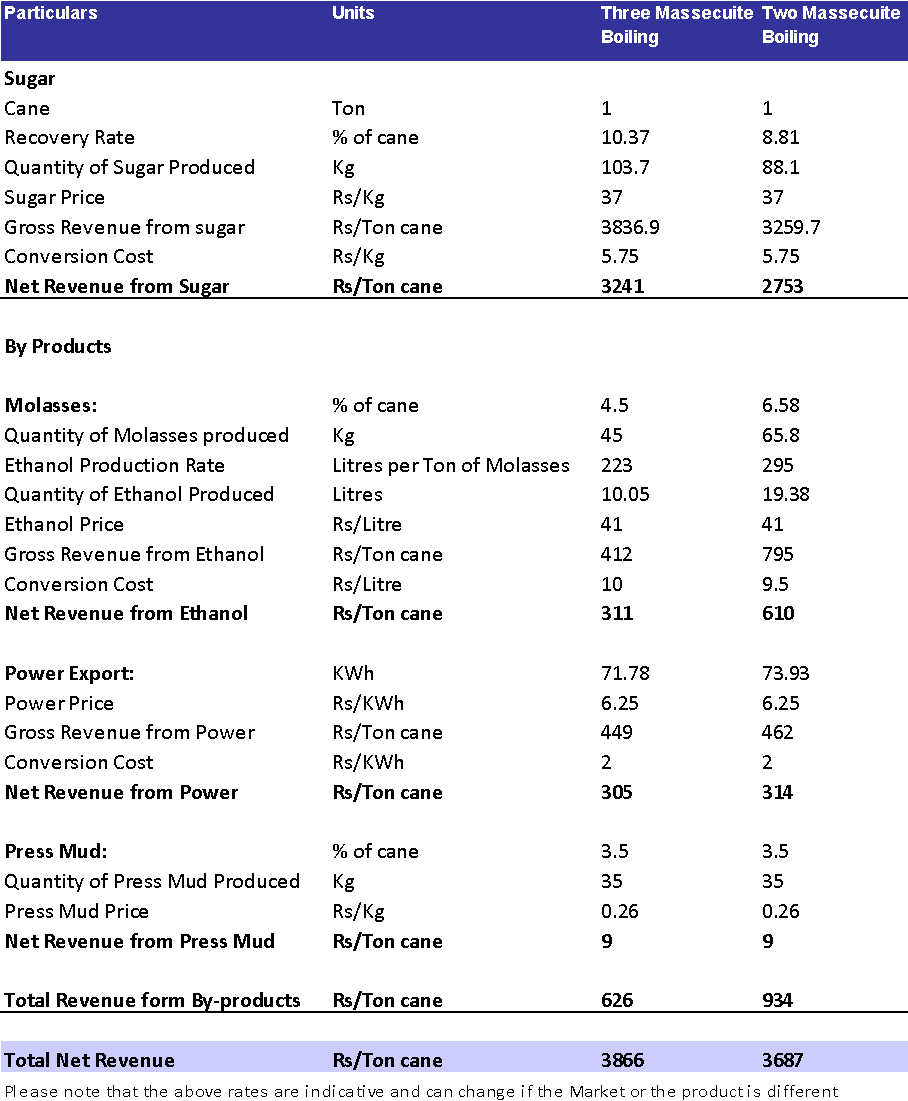 Vagaries of Government Policies
To understand how the government policies affect the sugar sector first let us understand why the sugar sector is so important for the government:
Thus the Central Government sets the Fair Remunerative Price (FRP) each year, which is the minimum price the sugar mill has to pay the farmer while procuring cane. On top of this sugar producing states set their very own State Advised Price (SAP) which many a times is much higher than FRP for reasons best known by the State Governments themselves
Let us have a look at how the mood of the government decides the pricing of sugarcane in the market… 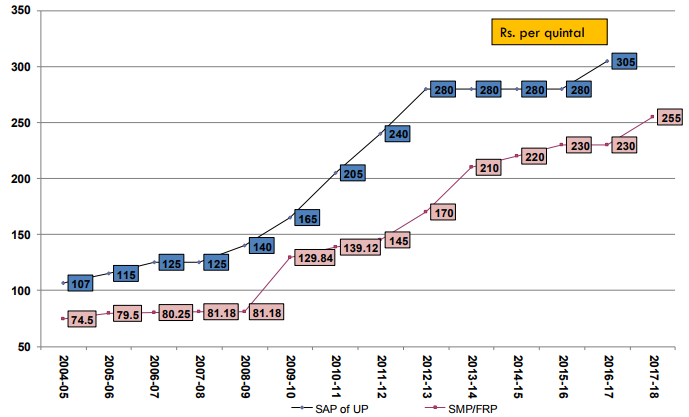 The blue line shows how SAP has moved over the years while the pink line shows the gap between SAP and FRP in Uttar Pradesh
Have a look at how the SAP more than doubled in 5 years during 2009-14. This was the period when Mayawati governed Uttar Pradesh as the Chief Minister while there was a Congress led government at the Centre
While the SAP decides the cost of procurement for the mills the final selling price depends upon various factors viz. export quota, domestic demand, government controlled levy.


Let us understand each of these in detail…
Domestic demand 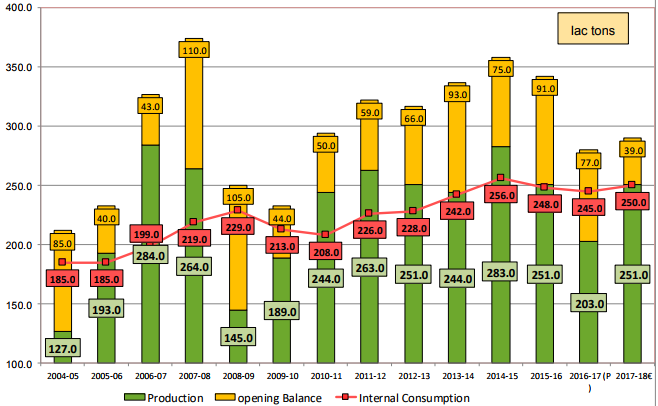 This is the demand supply situation in the domestic market. The supply depends not just on the production but also the opening stock for that year. The demand for sugar being a basic necessity remains constant and keeps inching up every year. Since demand is relatively inelastic pricing should remain more or less stable. However, the supply is very volatile, which means it is not the demand which is the problem but what moves supply.
Let’s have a look at how ex mill sugar prices have moved over the last decade 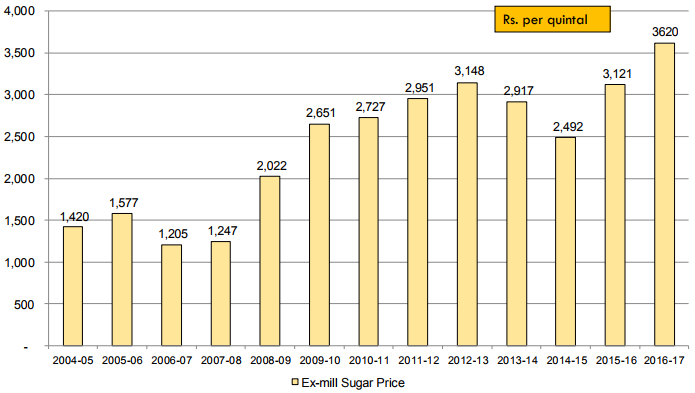 As we can see the current ex mill prices are the highest in over a decade. As we write ex mill prices for sugar trade in the same range as of FY17.
Government controlled levy
This regulation that the government used to impose on sugar companies was called the monthly release mechanism by which the Government controlled the quantity that Mills could 'release' into the open market. In addition to the release mechanism, sugar mills had to sell 10% of their produce to the Central government under the levy quota at subsidized rates.
Exports/Imports
The government controls import and export of sugar in the country 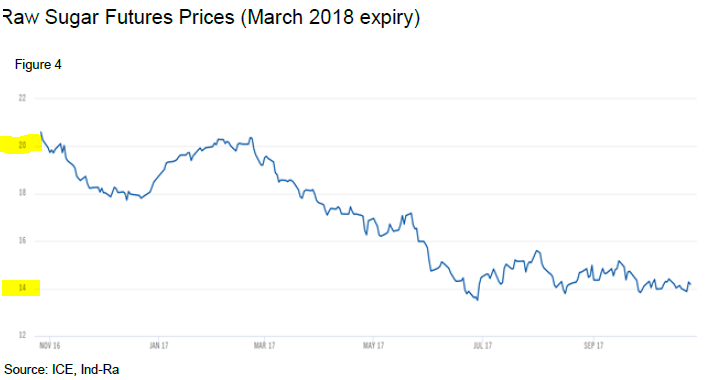 The prices of sugar have kept falling in the international markets over the last year. However, the government incased import duty to the already existing 40% by another 10% to stop cheap global sugar from flooding the Indian markets. Similarly when prices increase in global market sugar companies can only export on a pre fixed quota mechanism thus not allowing domestic pricing to be affected by global volatility

Notice the way realizations moved in relation to cost

This led to gross margins falling from a high of 58% to negative 4%
Here is a case explaining how FRP & SAP affect pricing for sugar companies in Uttar Pradesh
The FRP set by the central government entails a base price with benchmark recoveries of 9.5%. For every additional recovery that mills make out of their cane, they have to pay the farmer an incentive of Rs 2.68/quintal for every 0.1% of additional recovery. 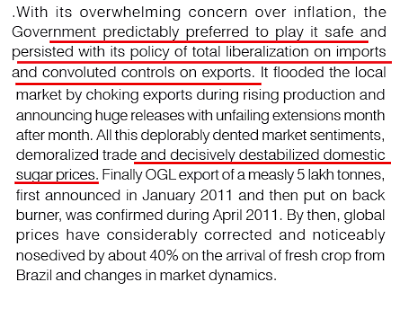 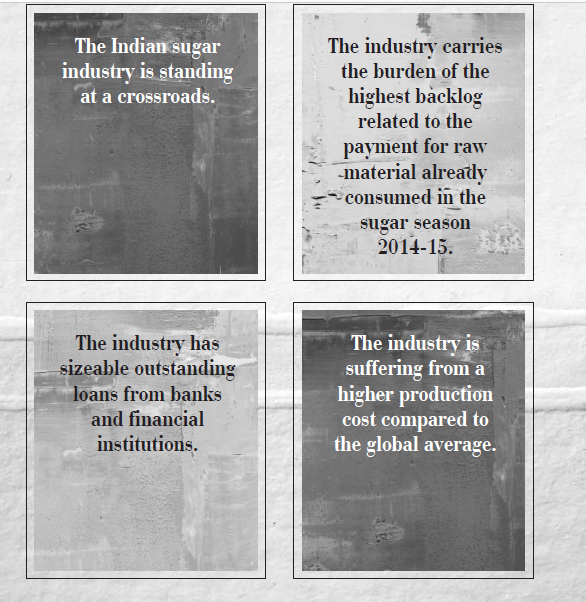 This is what the MD of Balrampur Chini Mills had to say in the Annual Report of 2015. The industry was dying. He suggested a solution. Most of the steps advocated were similar to what the Rangarajan Committee had recommended noted as under:


So what has the Government done…?
The situation today
India is expected to produce around 25.5mt of sugar this year, primarily led by significantly higher output from Maharashtra and Karnataka. With domestic demand being stable around that 25mt mark, there shouldn't be a need for imports into the market. With demand and supply being in equilibrium and the central government pushing the implementation of the cane pricing formula of the Rangarajan committee in U.P, prices could be stable moving ahead. Stability in prices will lend themselves to a stream of free cash for companies as growth capex isn’t on the anvil yet.
De-leveraging balance sheets and subsequent conversion of debt into equity has been one of the prominent highlights of corporate India in recent times and the sugar sector is no exception to that. In the past couple of years, most sugar companies have diverted all of their cash flows towards debt repayment and have healthier balance sheets
The following is an extract from Ind-Ratings highlighting the opening stock for FY2018 which should keep the prices stable as the opening stock is lower than the typical buffer kept by companies
Important understandings
This is a part of the series in which we have tried to understand sugar sector. In the next part we will have a look at individual companies across different regions to understand how companies have evolved over the last two decades in different regions
Posted by Unknown at 12:05 AM