Investors have always been attracted to companies which are cash generating machines. The reason is simple. The cash generators survive market cycles. They keep doling out huge cash in turn which is either re invested if the business is in growth phase or returned as dividends if the company is in mature phase and doesn’t needs cash for reinvestment. In both the cases its beneficial for the minority shareholders because internal accruals is the cheapest source of capital for a company to build a business while if free cash is given off as dividends or buybacks it puts money in hand of shareholders directly.
While the free cash generation capacity makes these business attractive there is an inherent risk which lurks which some investors fail to identify. Capital Allocation becomes very important for a company which is generating huge amounts of cash from its operations. The simple thing to do would be to keep re investing in the business but not all businesses are at similar stages of growth. Thus some companies choose to give off the money as dividends to shareholders. However, in a case where a company does not share cash with shareholders but re invests in its business it needs to be identified whether the business is/will be able to generate returns higher than opportunity cost of capital for shareholders. Many times companies have squandered cash from good business in bad business while showing it off as diversification. However it becomes difficult for an investor to differentiate between diversification and wasteful conglomerisation. The loser is the minority shareholder.

We can see the difference that capital allocation makes on returns for a shareholder
To put in simple words an investment of Rs 1 lakh made in ITC 14 years ago would have resulted in Rs 16.55 lakhs while a similar amount invested in VST Industries would have resulted in Rs 25.5 lakhs. That is a difference of over 50 percent on the final amount. This is why capital allocation is important for companies and also for investors

Over the last few months a new space that has seen much action in the recent times, one due to inflow of money by domestic investors which has made the “assets under management” (AUM) touch new highs everyday while next due to the listing of one of the biggest companies in the asset management space – Reliance Nippon Asset Management Co. (RNAM) is the “Asset Management” industry.


The point that catches our eye in this industry is the ability to generate large amounts of cash flow and minimal use of capital to grow this business. This is a combination which will allow companies in this space (especially leaders) to generate large amounts of cash. We find this business to be very interesting because capital allocation will become very important when you have large amounts of idle cash. It is a great way to test management honesty and acumen.
We have already seen how capital allocation of management decides what will future returns are from a cash generator. Thus now let us have a look at how two companies in the AMC sector operate and let’s understand how they are allocating capital for themselves and their shareholders
Motilal Oswal is a diversified financial conglomerate with varied interests in the areas of broking, asset management and housing finance. On the other hand, Reliance Nippon is a pure play Asset Management Company with a host of offerings that include mutual funds(both debt and equity) , Alternative Investment funds and Portfolio Management services for both individuals and institutions
First we would like to give some facts about the AMC industry in India

Now we start our exercise in understanding the fund structure and capital allocation policies which both Reliance AMC & Motilal Oswal following terms of deploying the windfall that they get in terms of free cash.

To understand the implication of capital allocation policies, let us first look at the difference between core business pre-tax RoE's. The pre tax RoE in this case is equal to the PBT + unrealized income on investments divided by average equity

The profit before tax includes the component of other income which should be subtracted to understand core business RoE's. Similarly, the denominator should be reduced by the amount of interest/income earning assets that the company has invested into. The excel attached below shows the calculation for the same 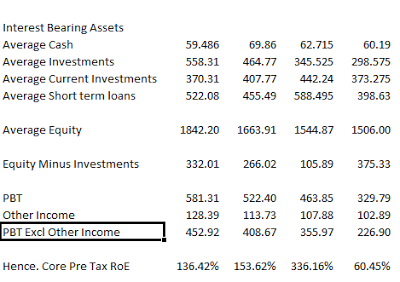 Thus core ROE’s of AMC business which Reliance operates is on an average over 100% every year which portrays the operational strength of the industry in which it operates. The benefit of operating leverage once leadership position is established is enormous for the industry
Now to answer the question that why reported RoE's are so depressed in relation to core business RoE's?
We listed down all the investments that the company had made from its internal accruals and calculated the subsequent returns earned. To not obscure our findings, we included both realized and unrealized gains that have accrued to the company 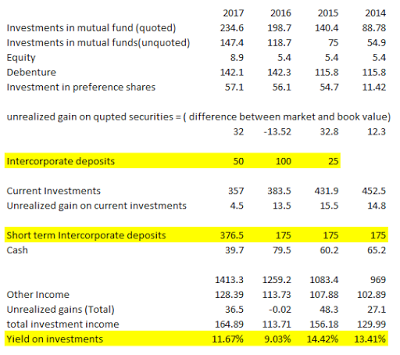 It would be imperative for the reader to understand that MOFS is a diversified financial services business with interests in the credit business as well. So in this regard, an apple to apple comparison is not possible. What needs to be done is that the consolidated balance sheet of the company must be looked at ex of the loans and advances made as they pertain to the housing finance business if one needs to compare yields that both companies are earning on their investments
We took the data of the last three years for Motilal AMC (as the mutual fund schemes were launched only in the year 2014) and tried understanding profitability trend through ROE since inception of the schemes (prior to the Mutual fund triumvirate, MO-AMC was a pure play portfolio management services firm with an AuM growth of 10.65 percent in 7 years)

Let us now look at the capital allocation policies of MOFS 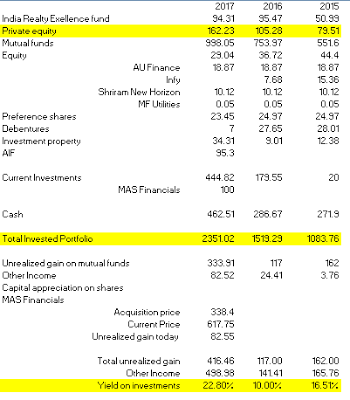 Observation
Reliance AMC vs MOFS
Thus the capital allocation of MOFS is tilted towards only one domain ie. Equity while Reliance has diversified it across multiple asset classes and also there seems to be some unanswered inter corporate loans which warrants further attention.
Posted by Dhruv Saraf at 12:06 AM